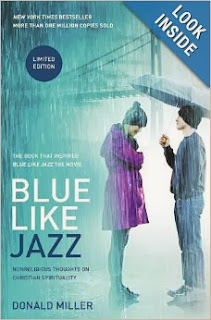 I wrote this review on GoodReads and on Amazon. I highly recommend that when readers finish a book, they review it at least on the site where they purchased it.


Well written, but mostly immature. Although his take on topics are challenging at times--his insistence to look at things differently--it began to wear on me. By the halfway point, the book was pushing 3 stars. He redeemed himself in the end when he pointed out what I had felt from the beginning: he was being hypocritical. He approached the problems of not receiving love and his own prejudices late in the book and so I bumped it back up.

I read this book after having read two books by Eldredge and one by Francis Chan in the last 30 days. It is odd to see the similarities among these books. Especially the references to pop culture. One thing he added was his apparition of Emily Dickinson. I don't think any Christian writer in his right mind would actually tell that tale. It was the beginning of his redemption for me, though. It was when he first began to be "real" as he puts it.

Nothing about culture validates philosophical thinking, religious beliefs, or human suffering. This is perhaps my biggest problem with his writing style. He elevates a progressive-thinking anti-religious think-tank, a hippie commune, a bachelors-are-us retreat, and an on-the-edge church as morally and spiritually more pertinent than the Midwestern "Republican-supporting" churches of his youth. It revolves mostly around the lack of structure, the value of not being judged, and the name brands of their clothes, the social consciousness of the music they listened to, the authors they knew, the quality of the coffee and beer they consumed, and the lofty intellectual relevancy of their conversations.

Christianity, or "Christian spirituality" as he puts it, is not made more pure because one is socially conscious. I think sometimes this is a misconception that is spread by mainline Christianity's fear-induced hatred of people we see as opposed to our values, our choices, and our love for God. We DO care about other people. We give. We battle our own prejudices. However, in the process of Don Miller's accusations about the Christian experience, he committed the same sin he was pointing towards. The speck of dust he was trying to remove from their eye was in his own as well. By midway through his book, he sounded....judgmental. Unforgiving. Unloving. The only causes that were worthy were the ones that made him appear "socially conscious."

In the end, as I have said, he recants. Repents. The truth is that we all have to struggle to be less selfish. We must all learn to die to self, and to live in love. This delicate balance of acceptance--of God's Great Gift, of each other as made in His image--and sacrifice is the key to living as God designed us.

Also:
On marriage and relationships, he was rather hysterical and clueless. These two qualities are intertwined. His friend, Paul, was actually more insightful.

On the topic of the metaphors of love being metaphors relating to economy: that was pure genius, and admittedly not his own idea. I think there is a book title there, something maybe I will pursue: The Economy of Love. Maybe use math symbols and NYSE symbols on the cover. My idea. No one take it, please.

On the topic of loneliness: probably his most lucid writing. I think this is because the topic was near his heart and wired to his life.

On the concepts of serving self: he began the book with this and then spiraled into its net. Even the "Confession Booth" scene was all about him, really. His own need to feel forgiven. To feel a part of something bigger than himself.

On the subject of his father: I think many of his problems actually stem from this loss, this emptiness in his life. His lack of intimacy, his living life like it is the radio station, "K-Don, All Don, all the time," and his need for acceptance comes from this loss. I am possibly playing the Monday-Night psychiatrist here, but I think I am on to something.

I have rambled long for a book I found only mediocre.

In the end, his deliberate cleverness, his way with words are compelling, but his theology is skewed. At the same time it is raw and real, personal and genuine. These qualities overcome his immature theology, his hypocritical liberal bias, and his sloppy scriptural references.
Posted by Unknown at 5:18 PM No comments: